Before we begin, I wanted to say a few words regarding my post from last week. I had written about the importance of charging rent to “boomerang kids” when they move back home. The idea is to welcome them as the adults they’ve become with an understanding, on both sides, of what’s expected.

This isn’t to suggest that you charge rent in all cases, however. Our kids could move back for any number of reasons and many of them, such has health-related issues, personal trauma, and so forth, would (and should) reasonably be free from rent for obvious reasons. I failed to mention this last week and wanted to clarify that here (thanks for the reminder - you know who you are).

As often happens in the short-term, financial markets are all over the place. Stocks have moved up from recent lows, but the interesting activity has been mostly in the bond market. I’ve mentioned previously how the yield curve is currently inverted and how this has been a good indicator of an oncoming recession. Let’s update where we stand.

My research partners at Bespoke Investment Group put out a very good piece last week addressing how long the yield curve normally stays inverted before it starts flashing a bright red light, so to speak, for a coming recession. As shown in the graphic below, out of the seven recession periods (the gray bars) in recent decades, the yield curve has been inverted for at least 30 days, but more commonly at least 50, before being a better signal.

If you look closely, you’ll also see a lengthy inversion in 1967 that didn’t precede a recession, as well as a couple of blips as outliers in the late 90’s. While not a foregone conclusion, our current inversion is about 20 days old, so we’re knocking on the door of this becoming a more meaningful indicator.

As of this writing the 10yr Treasury bond yields 2.04%, contrasting with the very short-term 3mo Treasury bill yielding 2.2%. There’s been lots of movement in yields lately but this upside down, or inverted, situation has remained.

What’s the Federal Reserve to do? As we’ve also discussed previously, at least part of these interest rate moves have to do with investors flip-flopping their expectations for Fed policy. Investors had been expecting the Fed to increase rates. But this changed quite dramatically in recent weeks as some weaker economic numbers came in and trade tensions between us and (what seems like) the rest of the world seemed only to get worse. The Fed meets tomorrow and, while most investors aren’t expecting a rate cut now, one or two are expected by year’s end.

Additionally, Vanguard just released an update to their economic expectations suggesting so-called “insurance cuts” from the Fed. Vanguard’s idea is that given the mixed state of the economy here and abroad, as well as the aforementioned trade tensions, the Fed cutting rates a little to keep the economic engine grooving along makes a lot of sense.

Bond investors generally agree with Vanguard’s perspective. The Fed’s stated objective of slowly raising rates as the economy grows now stands in stark contrast to what the market thinks. This presents an interesting dilemma. The Fed isn’t supposed to cater to markets, but it doesn’t want to send mixed signals either. If the market is wrong, which is could very well be, and the Fed doesn’t cut rates, this could hurt stocks and bonds in the short term as investors reassess (to put it mildly) their expectations. It’s a delicate dance and, if done wrong, could cause rates to swing the other way, perhaps ending the inversion. 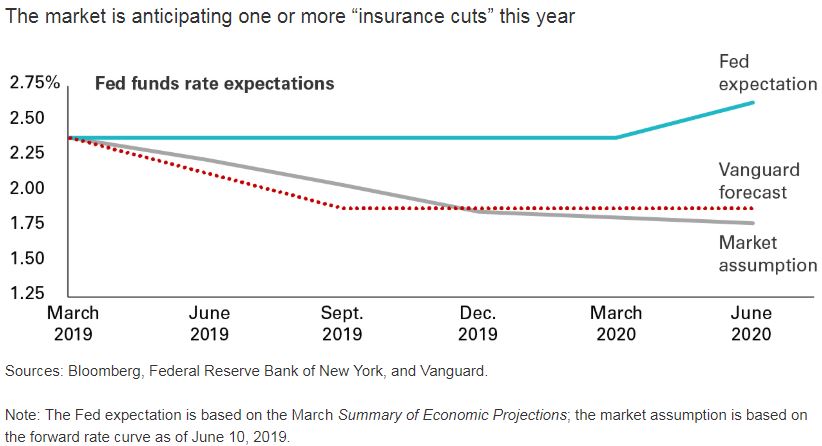 All this is interesting in the short-term and keeps market watchers glued to their news feeds. But for us, longer-term investors with longer-term goals, we have to remind ourselves to stay above the fray. While it’s growing more likely that we’ll see another recession sometime soon, it doesn’t mean it’s time to freak out. Even through all the nasty recessionary periods shown in the chart from Bespoke, the stock market grew for long-term investors. The bond market fared well too for folks who stayed the course.

As I’ve mentioned before, none of this is meant to scare you, but to offer a reminder to get mentally prepared for when the next recession does come. Basically, it’s about playing defense without throwing in the towel at the first sign of trouble. Easier said than done, I know. We can talk whenever you like about ways to shore up your plan against that eventuality.

Here are links to the articles I mentioned: