I’ve mentioned in recent weeks about the “yield curve” being inverted. This happens when bond yields are backwards and short-term bonds yield more than long-term. Since this situation is a near-perfect indicator of a coming recession it’s absolutely something to pay attention to. But is the bond market actually telling us a recession is coming, or could it be pulling a head fake? What about investor sentiment? What’s that telling us?

The yield curve briefly “uninverted” last week after several weeks of inversion before inverting again. Sounds a little strange, right? Bond investors are currently betting with 100% certainty that the Federal Reserve will lower interest rates when they meet at the end of this month. Investors are also pricing in more cuts later this year. Presumably, the only reason the Fed would cut rates is if they think we’re at risk of sliding into recession, so basically that’s what the bond market is telling us. As we edge closer however, the bond market is fidgeting a bit with anticipation and so is the stock market.

Stock investors love declining interest rates because cheaper money helps juice stock prices a little longer, even if it just delays the inevitable. This thinking is what has, at least in part, been driving stock prices higher lately. But it’s interesting that even though stock market indexes like the S&P 500 have hit record highs (the S&P closed over 3,000 for the first time last week), typical “retail” investors have for many months largely been shunning stocks in favor of bonds.

Monitoring “fund flows” is important because retail investor sentiment is often seen as a contrarian indicator. They buy late, buy too much, and generally crowd in after the “smart money” has already started leaving (think lines out the door at a local brokerage office as investors waited to buy tech stocks in early 2000 just before the bubble burst). That retail investors are generally sour on stocks is telling and could mean the markets and the economy have more life in them after all, even if the Federal Reserve sees fit to lower interest rates.

The following comes from my research partners at Bespoke Investment Group and shows fund flows into and out of stock and bond mutual funds. Look at the last chart and compare the selling retail investors did in January following the lows last December. Retail investors sold almost as much as they did during the depths of the Financial Crisis. Was last December like the fall of 2008? Some investors certainly thought so. Where’s a level head when you need one?

The table below provides a summary of mutual fund flows through the latest reporting period last week showing actual flows on the left and how those flows rank relative to history on the right. With the stock market breaking out of its range to new all-time highs, you would expect flows into equity mutual funds to be surging, and while there has been a surge in mutual fund flows, the direction has been out of as opposed to into stocks.

In the latest week, equity mutual funds saw nearly $17 billion in outflows, bringing the four-week total of outflows to just under $44 bln. On a percentile basis, those total outflows rank below the 2nd percentile relative to all prior one-week periods in the last decade and below the 3rd percentile relative to all other four-week periods. Not only has there been an exodus out of equity mutual funds, but the declines have been broad-based across domestic and global funds.

The fact that outflows have been so large just as the S&P 500 is hitting new all-time highs is unique, to say the least. The chart below shows the rolling four-week total of fund flows going back to the start of 2007. During that time, there have only been eight other periods where the magnitude of outflows from equity mutual funds has been more than $40 billion (as it is now). If you look at the dates of each of those occurrences, more often than not they were during periods of elevated volatility during a market decline rather than in unison with an all-time high in the equity market. 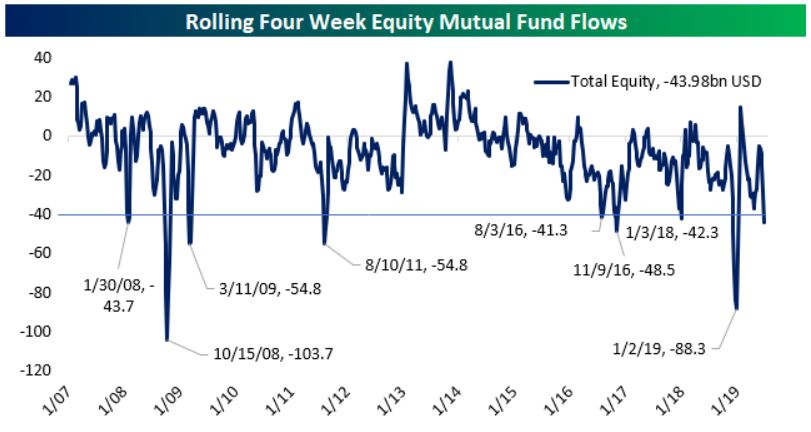