With all the market volatility over the past few weeks I thought I’d touch on a few recent data points about the economy and markets.

Bottom line, we’re in a very mixed investing environment right now, so it’s natural to feel confused and even a little frightened about the variety of headlines coming at us.

The charts below come from my research partners at Bespoke Investment Group, but the commentary is mine.

The American Association of Individual Investors regularly publishes a survey of members to gauge sentiment. As you could imagine, investors frequently change their minds about whether they’re “bullish” or “bearish”. Known as a coincident indicator because it reflects what’s happening in the markets now, when markets are down investors typically report being negative on stocks (bearish) and positive (bullish) when the market is up. We want to watch for unnecessarily large shifts in sentiment. As we see in the following chart, the recent surge in bearishness has been pretty extreme (far right side - straight up versus a more measured increase). 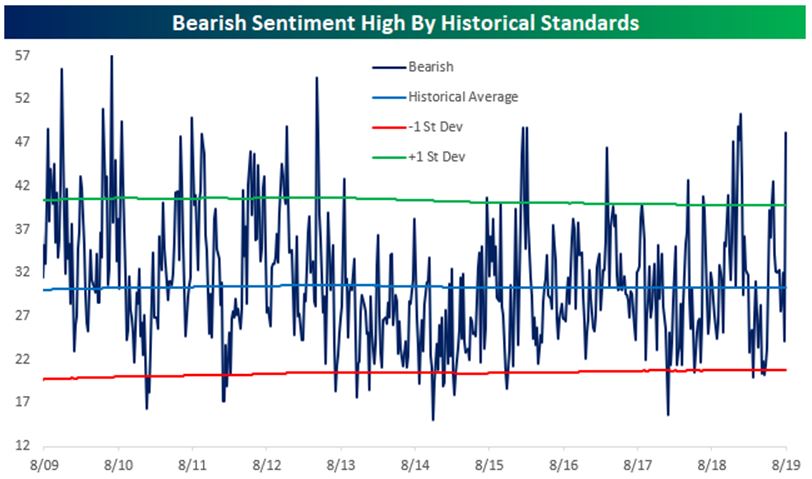 Investor sentiment is also seen as a contrarian indicator because, frankly, individual investors tend to be reactionary and turn negative or positive at the wrong times. Extreme spikes in bearishness typically imply better returns for stocks in the near-term, but we’re kind of in uncharted territory given how much uncertainty is created by proclamations from the POTUS Twitter account. It will be interesting to see how sentiment changes in the coming weeks. But for now, individual investors are decidedly negative when it comes to stocks.

Similar to the survey referenced above, the NFIB, an organization of small business owners from across the country, regularly posts a poll that measures sentiment among its members. As seen in the chart below, business owners report rising optimism. But they also report trouble finding enough qualified workers to fill job openings. According to Bespoke, NFIB members reported labor quality concerns being the highest on record since they began polling in 1973! 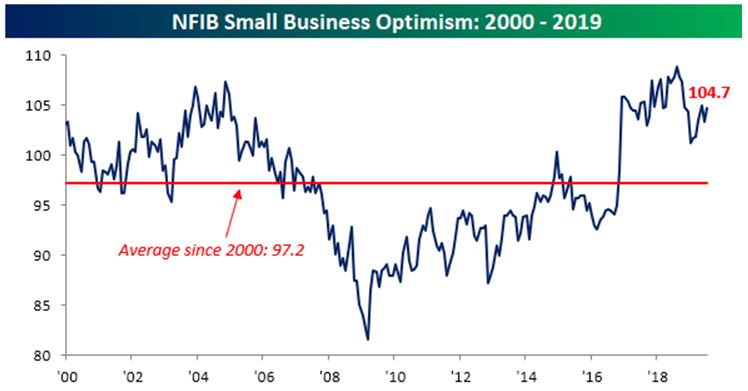 So, in an environment where individual investors are bearish, business owners are growing more bullish, even amid all the trade-related uncertainty we keep hearing about. Part of the reason for this is that “poor sales” is among the lowest concerns for small business owners. We hear about this on the corporate side as well. Walmart recently reported strong earnings from what the company sees as a strong consumer. That speaks well for our economy fending off recession for a while. Remember, ours is a consumption-based economy, so if people continue spending without racking up too much debt, the wheels can keep turning.

What about the bond market?

So far this year bonds have been in rally mode with returns getting better the longer the maturities are. This is in stark contrast to the last several years where interest rates had been expected to rise and bond returns where expected to be low. Now, seemingly, we’re in a different environment where this has been flipped on its head.

Last summer the 10yr Treasury (a hugely important benchmark that helps set mortgage rates, among other things) hit 3%, a level not seen in years. In recent weeks the yield was half that as scared stock investors sought the safety of bonds (rising prices for bonds means lower yields). According to Bespoke, major bond market moves like this typically don’t last and tend to reverse themselves in subsequent months as cooler heads prevail in the stock market.

These gyrations, coupled with the Fed lowering interest rates recently, has further inverted the yield curve. Basically, the Fed raised rates at the short end of the curve while investors bought bonds at the longer end (again, yields fall as more investors buy bonds). This caused the 2yr/10yr curve to invert in addition to the 3mo/10yr curve which had already been inverted. Both are indicators of a looming recession. Bond investors are highly pessimistic right now about the health of the economy and are currently expecting the Fed to lower rates at least a couple more times this year. This could extend the yield curve inversion all by itself and would, at least in theory, point more clearly at recession.

So, the bond market is telling us one thing and the business community is telling us another. Add in tariff-related tweets and other random headlines, and you have an idea of why individual investors are so bearish (and confused).

What should you do in this kind of environment? I would imagine a recession to be on the horizon. How far off? It could be more than a year, but it’s important to start gearing up for it now. Add slowly to cash savings, pay down or refinance debt at lower rates (mortgage rates are at all-time lows right now), and refine your longer term plans. Also, stock market volatility could stay elevated, so practice rebalancing as needed or otherwise doing nothing while reminding yourself that sometimes that’s the best thing to do.