The Inversion that Wasn't

The world of investing is a strange place. Some months ago, the yield curve, or the difference in yields paid by bonds of different maturities, inverted. Since yield curve inversions are a near-perfect recession indicator, much ink was spilled discussing it. Understandably, investors were focused on when a recession would hit. Many analysts thought that maybe a year or two out was a good expectation.

Fast forward to today and it seems like investors couldn’t be bothered to consider such a thing. Barring day-to-day volatility driven largely by trade tension headlines, stocks have continued to rise. The Dow Jones Industrial Average and the S&P 500 have both recently hit record highs. But aren’t we supposed to be edging toward recession? How can stocks keep going up?

This summer the Federal Reserve started lowering interest rates in response to fears about the economy slowing and trade-related uncertainty. Since then they’ve dropped short-term rates 0.75% and this, probably more than anything else, has helped investors ignore the yield curve inversion. But then the yield curve began to steepen recently and is no longer inverted! What’s an investor to think?

Does all this mean our recession fears were unfounded? Does it mean stocks can rise indefinitely? The answer to both questions is no, but stocks can continue to rise for a while because the stock market loves low interest rates, even in the face of growing problems such as low inflation, declining business sentiment and the continued slowing of the manufacturing sector. And the love affair strengthens when investors have been assured rates will stay low for the foreseeable future.

My research partners at Bespoke Investment Group explained this through an interesting metaphor following the Fed’s rate setting meeting in October.

“It was almost the equivalent of your parents telling you on a Friday that they were going away for the weekend and wouldn't be back until Monday at the earliest. In other words, party this weekend!”

The partiers in this case are investors and the keys to the house (and the liquor cabinet) are low rates supplied by the Fed (the parents). Historically, yield curves tend to re-invert after being inverted as long as they just were, so that will be something to watch out for in the coming weeks and months. Another inversion would certainly stoke the recession fires again. By the way, analysts are still predicting a coming recession, just maybe a little farther away than originally thought.

If you’re interested, here’s a list of yields from the Wall Street Journal as the bond market closed on Friday. You’ll see the yield percentage being higher with the 30yr bond and then declining at each separate maturity step down to one month. This is what a normally sloped yield curve looks like, albeit with historically low rates across the board. Flip this around and make the shorter maturities yield more than longer-term and you’ll get a sense of how backwards yield curve inversions can look. 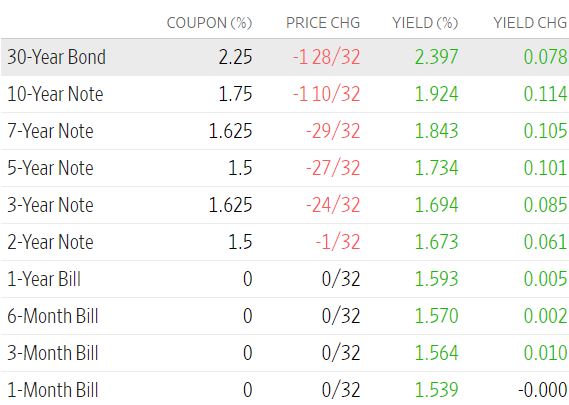