All Hail the Global Consumer

We hear about slowing economic growth at home and around the world, but it’s interesting to see what consumers are actually doing with their money. It turns out that consumers here and in China are doing okay and are quite willing to spend, at least for now.

While not an official state holiday, Singles’ Day has become an important consumption day in China. If you haven’t heard about this before, you can think of the day as being a much larger version of our Black Friday.

Recognition of 11/11 each year is said to have begun in the 1990’s as a celebration of being single in China, with the 1’s in the date representing being single and then being paired as a couple. People go on blind dates, some choose it as their wedding date, others pamper themselves or… buy stuff online. In the last ten years or so Singles’ Day has turned into a massive sales event with Alibaba (the Chinese e-commerce giant similar to Amazon) displaying total sales in real time and kicking things off this year with a live performance by Taylor Swift!

Last year Singles’ Day sales were almost $31 billion. This year Chinese consumers spent $38 billion and, according to JPMorgan, surpassed in less than 12 hours the $24 billion US consumers spent last year during our five-day Black Friday weekend. The chart below, again from JPMorgan, shows how sales increased as the day went on. Granted, China has about a billion more people than we do, but they still spent more than us proportionally. 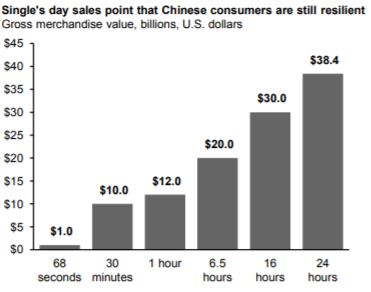 The average Chinese consumer spent about $180 and bought items as diverse as makeup, personal electronics, clothing from Nike, and diapers. Some analysts were surprised at the growth from last year (up about 26%) after assuming the slowing global economy would show up in slightly slower Singles’ Day sales. Aggressive retailer discounting could help explain this increase, but it still means folks were coming out in droves to spend.

The same issue seems to be playing out here at home, with analysts looking for slowing consumption while consumers report increasing levels of optimism. The following chart from Bespoke Investment Group shows how consumers are growing more positive about the economy. This has led to a big uptick in sentiment about their own finances. Low interest rates and low inflation helps, as does wages rising for the average American. More folks are out looking for work and fewer who are working report living paycheck to paycheck. In short, the typical consumer has money to spend and is optimistic enough to do so.

This optimism, both here and abroad, bodes well for our economy and the global economic engine in the near term. But historically (and unfortunately), the consumer is often last to know when it comes to an economic slowdown or recession. Major retailers like Home Depot and Kohls are expecting fewer earnings in the next year and other companies are echoing this kind of thinking.

So, do we chalk up a happy consumer as a contrarian indicator? Possibly. But if something like Singles’ Day shows us nothing else, it’s that the power of the global consumer could be stronger than many of us realize.