It’s sexier to talk about points than percentages when it comes to how the news media handles market movements. Take yesterday as an example. Markets fell due primarily to concerns about the spread of coronavirus. For most of the trading day the Dow Jones Industrial Average (the Dow) was down over 900 points before ending the day down slightly over 1,000.

That’s a big decline by anyone’s standards, but the news media leads with the point loss because it seems like such a large number, and it is. But if you dig a little deeper, you’ll see that since the Dow has grown in recent years, the percentage decline associated with the point drop was only about 3.6%, less than you might expect after hearing a dire number like 1,000. This is part of the reason you probably didn’t hear about how the S&P 500, a better indicator for market performance, performed about the same yesterday… though it was only a 112-point loss. Which sounds more newsworthy even though both were nearly the same percentage decline?

Point/percentage declines like we saw yesterday are not uncommon. They are utterly unpredictable, but markets do come back from them. For example, on so-called Black Monday in 1987, the Dow crashed about 23% in one day, or 508 points. During the Great Recession, the Dow frequently fell over 7%, or around 700+ points, on several different days. The Dow even dropped over 1,000 points, or about 4% or so, a couple of times just two years ago on global growth fears. Stocks eventually continued rising to the levels we see today.

This point fixation is a psychological challenge for investors (and the news media) and is one of the many reasons it’s so hard to be a successful long-term investor. I’m suggesting that while points are interesting, it’s the percentage changes that really matter. For example, on any given day it’s normal for stocks to rise or fall by 1%. That, by itself, is a boring number. But if it’s reported as the Dow “tanking” by 290 points, that sounds more interesting and gets reported as such, even if it’s the same thing as falling 1%. I think if percentage changes were quoted instead, the average investor could find it easier to stay calm amid what are often chaotic times.

So, long story short, take a deep breath when you hear big point declines being tossed around by media outlets. Nobody likes losses, but the actual losses you sustained are probably less than you imagine, especially if you’re well diversified.

All that being said, we’re still in the thick of it when it comes to fears about the coronavirus. Stocks are down a bit again this morning and bonds, where investors typically go during times of stress, are rising. If you’re interested, here’s some information put out by my research partners at Bespoke Investment Group yesterday morning regarding the virus.

Coronavirus: Global headline data on Covid-19 net case growth remains positive. Because tens of thousands of cases in Hubei (15,343) are confirmed as recovered and the number continues to rise while total cumulative case counts have decelerated dramatically, existing case growth net of recoveries and deaths has slowed dramatically. Day-over-day net case growth has been negative for five of the last six days, while total cumulative cases are down to a growth rate of less than a half percent globally. Deaths currently stand at about 3.1% of all cases, while 31.5% of all cases have recovered.

The problem with this headline analysis, and the biggest reason that the S&P 500 is trading down 2.5% this morning, is that the legitimate and material improvements in China are masking rapid growth in the number of cases outside of China. Saturday and Sunday both showed cases growing more than 20% sequentially. Established disease clusters in Hong Kong and Singapore where there have been active cases since January 23 are not growing rapidly but in Italy, South Korea, and to a lesser extent Japan, the case count is exploding. These industrial economies with robust public health infrastructure all have the ability to manage even large outbreaks, albeit at great economic cost.

True pandemic risk remains low, but the cost of shutting down large swathes of northern Italy, Korea, and Japan are significant. Add to that the fact that countries like Iran and Iraq (where the public health and general health care infrastructure is not as capable as the other large clusters) are reporting rapid case growth, and the markets’ correction is understandable.

China has shown Covid-19 can be contained, but the growth of ex-China cases illustrates that despite successes in reducing case growth economic risks abound. 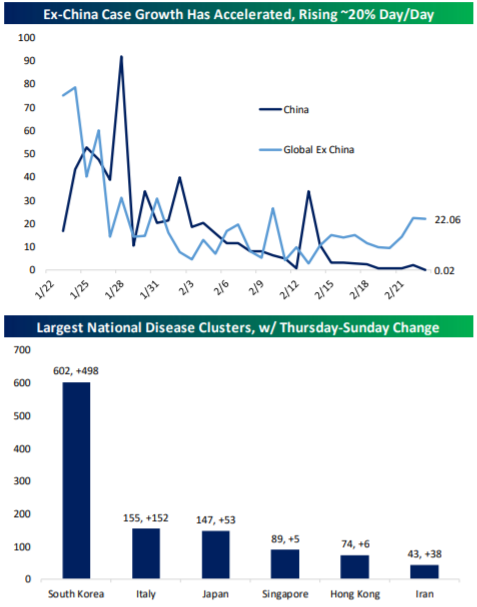