According to the Press Democrat, the 2019 Napa, Mendo, and Sonoma County harvest was worth over $1.6 billion, with almost 40% of that being picked right here. Time will tell how hard this hits our grape growers but it’s not likely to be good news. And to top it off, it seems like every third person I talk with is considering moving. Where to? Lots of places. What else could be in this list of negativities? Probably a lot. These are challenging times, no doubt about it.

In lighter news, the major stock indexes are positive for the year after brutal losses during Spring. We’ve discussed previously how this rally has been due to a variety reasons but led by a relatively small number of stocks. The so-called FANG+ index is a good example. It’s made up of Facebook, Amazon, Netflix, Google, and includes stocks like Apple and Tesla. This index has doubled in value since the March lows. The latter two companies have now split their stock after a massive runup of 75% and nearly 500% year-to-date, respectively. Exuberance for certain companies seems to be getting irrational, so to speak, especially since a surprising number of high-quality stocks are still down for the year. But again, there are a variety of reasons for this and they’re not all crazy.

One reason is news from the Federal Reserve last week. The central bank announced changes to how it views its inflation-fighting mandate (it has two mandates - the other is to promote maximum employment). We need some inflation to keep the lights on in our economy, just not too much. We also need the Fed to help us expect where inflation might be headed.

To help set clearer expectations, the Fed announced a specific target for annual core inflation (“core” removes food and energy prices) of 2% back in 2012. The problem, of course, is that since then our economy hit the target just a couple of times and only briefly (see the chart below from The Wall Street Journal). This, after the Fed added gobs and gobs of money to the financial system coming out of the Great Recession. Perhaps the Fed wasn’t being aggressive enough? Perhaps the focus needed to shift? 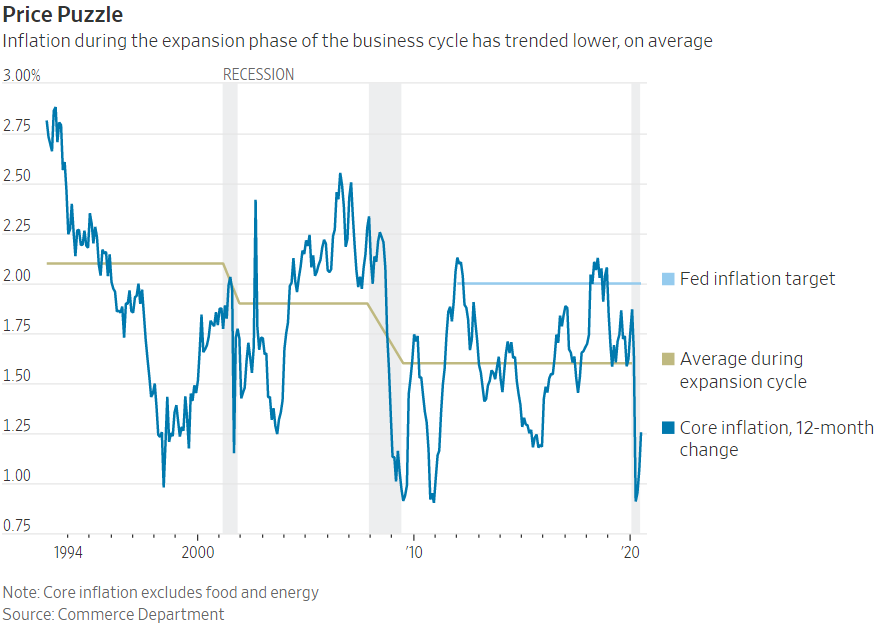 Well, last week the Fed announced its findings after looking at these issues as part of a review it began last year. It’s main outcome: Going forward the Fed will treat its inflation target as a longer-term average, letting inflation run higher for a time to balance out below-target periods. This is important because the Fed has already said it plans to keep interest rates low for a year or so as we emerge from the virus-induced recession. This change means that low rates could last much longer than that. The Fed may also get aggressive in pushing Congress for more stimulus spending and other regulatory changes.

All of this should stimulate the economy and continue to underpin the stock market (as of this writing on Monday the S&P 500 just ended its best August in decades). Low rates also punish conservative savers and an overly accommodative Fed can help create asset bubbles, so “low for longer” isn’t without risk. But we’re still digging ourselves out of an economic hole and need all the help we can get.

It’s tough out there in many ways right now, so I think it’s good to know that our nation’s central bank is innovating to help support the economy. They can’t find a coronavirus vaccine, re-open a closed business, or put out wildfires, but they can make borrowing money as cheap as possible. The Fed is also looking into how it can impact the social justice discussion, so that’s positive too. Let’s take good news where we can get it, right?