In the past year many of you asked how the stock market could perform so well even as so much seems to be going wrong in the world, how it can seem so detached from reality? The answer depends on one’s perspective since there are lots of ways to think about the question. One way is that there are times when the market is completely mad. The so-called madness of crowds kicks in and greed spurs some investors to willingly put their blinders on to everything other than rising share prices.

This isn’t everyone, of course. When we talk about all the ebbs and flows in the stock and bond markets we’re mostly thinking about active traders, those trying to beat the market, and for some of whom trading stocks is a game. Their collective mood drives much of the day-to-day volatility we see, so keeping tabs on what they’re doing and why is instructive.

As you can imagine, their mood can flip quickly and for no apparent reason. The abruptness of the change sometimes leads to dramatic selloffs when short-term investors sell with the same reckless abandon with which they bought. We saw this a year ago as the Covid shutdown orders caused some investors to literally sell everything, defying all logic and reason. Then many were so shellshocked that they couldn’t get back in and missed the quick recovery. In hindsight, this was a great example of what not to do.

At other times active traders seem to wake up and look around with much clearer eyes. Instead of being detached from reality they’re soberly focused on it. Not the broader reality but the financial and economic.

A good example of this is the shift that’s been taking place in the stock market beginning last Fall. Since the market lows one year ago today, the S&P 500 is up about 75%, a great return, especially given how bad things were back then. It’s been uneven, however. The largest stocks in the S&P were doing the best for about the first six months of the recovery and far outpaced the smallest stocks. The index got so top heavy that at one point five big tech stocks were driving most of the index’s performance.

Then traders started switching their focus from the stay-at-home stocks (such as in the technology sector) to those geared for the re-opening of the economy (like energy, banks, and commercial real estate) and this accelerated into the new year. High-flying “growth” sectors like tech had surged out of the pandemic lows but then gave way to beaten down “value” sectors as the shift accelerated in recent months. The smallest stocks are now up over 60% since early September while the biggest stocks are up only about 5%. This is a major shift, but that it’s occurring within a rising market is a good thing. It implies that investors are paying closer attention to reopening and that the big tech names had probably risen too far too fast.

The following chart from Schwab illustrates this. You’ll see the performance contribution of the top five names until early September when the shift begins and then their contribution wanes.

Something similar has been playing out in the bond market at the same time. Interest rates have been rising as some bond investors have been selling due to growing inflation concerns. The idea is that with so much money moving around the economy, and soon there will be more (and more again with a huge infrastructure package now being worked on), that this is bound to create damaging inflation, or even stagflation (rising prices amid a flagging economy). We haven’t had to deal with an inflation problem for a long time so it’s natural and even wise to be wary, even though these concerns may prove to be unwarranted.

The following chart from Bespoke Investment Group shows the shift in the bond market, beginning with the red dot in the first part of September. (As a reminder, as rates rose in the chart that means bond prices fell.) 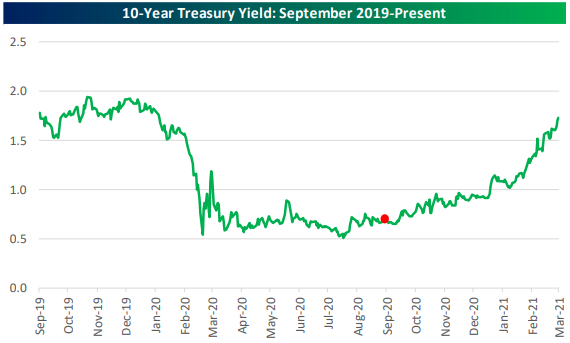 That more active investors are processing these sorts of things is good for investors like us because our economy isn’t made up of only one or two sectors. In a healthy market eventually prices in outperforming sectors like Technology have to come back to earth a bit and some attention be paid to the rest of the economy. It makes sense that as more of the country reopens a more diverse range of companies will start being profitable again, not just the likes of Amazon and Apple. Much of these growth expectations are priced into the market currently, but an actual healthy reopening over the next year or two could still be a tailwind propelling growth and value stocks further. Interest rates could continue to rise but, if so, would only be approaching more normal levels.

The last year has taught us many lessons but one from the investing world is how diversification and not following the crowd helps the long-term investor.

Investors like us have been able to ride these shifts with relative ease. We’ve owned both large and small stocks in the growth and value categories and haven’t chased performance during all the volatility. We may lean a little one way or the other, but no big bets either way. We also haven’t made big bets on the direction of interest rates, so bond performance is better than it could have been. Lots of active traders have done the opposite and many, if not most, are probably no better off than we are after all their trading, and some are much worse.