Uncertain - An adjective describing something unable to be relied upon; not known or definite (thanks to Google for the definition and the physicist Werner Heisenberg for the title).

Lately I’m reminded a bit of the grind coming out of the Great Recession. By late-2009 and into 2010 stocks had been rising for some months even as many Americans were suffering terribly. Unemployment had hit 10%. Foreclosure rates were climbing steadily and would ultimately peak in 2010. Trillions of dollars had been lost from the nation’s housing market. It seemed like the situation was going from worse to horrible.

I used the word “uncertainty” a ton back then when talking with clients. I recall on more than a few occasions speaking to groups and getting pushback on how a vague term could possibly play such a large role in the stock and bond markets, and even our daily lives. Some couldn’t believe that human psychology impacts everything from the shopping habits of everyday consumers to investment decisions being made in Fortune 500 boardrooms.

But it’s true. When we feel certain we’re optimistic and can plan. We invest for the future and feel confident in our actions. Uncertainty, however, and rising amounts of it, undermines all aspects of our daily lives and economy. It makes us anxious and fretful. So, the word gets used a lot these days because maybe it best describes our current predicament. There are so many unknowns and much of what we’d ordinarily rely upon, no matter how mundane, seems to be in flux.

Even though I feel like I’m squinting to see the light at the end of the tunnel, hope springs eternal. During the darkest days of ’09 and ‘10 that I mentioned above, tiny so-called “green shoots” were popping up everywhere within the economy. There was still lots of pain, of course, but ironically the recession had already technically ended (in June 2009, as a matter of fact – it’s always defined afterward) and the economy would soon come roaring back.

Here are two quick pieces from JPMorgan regarding recent market volatility and the health of the banking system. Both address questions being bandied about in the media and some of you, so I wanted to share these perspectives.

At the end of last week, it looked like the equity market pullback that everyone had been expecting was finally beginning to materialize. However, at a time when corporate and economic fundamentals are weak, and expected to remain impaired for the foreseeable future, investors are increasingly taking their cues from the macro data. As we have touched on in prior posts, investors seem focused on three things: the rate of COVID-19 case growth, the policy response and the potential for a strong rebound in corporate profits over the coming 18 months. When viewed through this lens, the equity rally that we have seen begins to make a bit more sense.

On the data front, markets are focused on rate of change, rather than absolute levels. That is all well and good when the data is improving, but it is important to recognize that there are limits to how long this can continue. Until we have a vaccine, there will be a limit to how much the economy is able to re-open; as a result, the pace of improvement will gradually slow, and markets will shift their focus to the level of the data, rather than the direction. Take the May retail sales report as an example; markets cheered the 17.2% m/m increase in sales, but ignored the fact that the level remains more than 8% below the January/February average. Furthermore, if we assume monthly retail sales growth is in line with its 10-year average going forward, we will not surpass the January/February average until October 2022.

On the policy side, the taps are open and stimulus is flowing. Last week saw the Federal Reserve (Fed) suggest that policy rates will remain at the zero bound through 2022, and the beginning of this week saw them commit to purchasing corporate bonds in the secondary market. On the fiscal side, there is a clear expectation that the bazooka will be fired again; this will likely extend unemployment benefits through the end of the year, and preliminary reports suggest that an infrastructure package is also being discussed.

So the stars seem to be aligned – the data is getting better, policy on all fronts is accommodative and case growth remains under control. While a second wave of infection or removal of policy supports would cause markets to pull back, it is unclear whether either of those will materialize in the near-term. As such, we remain focused on the ability of the economic data to continue surprising to the upside, and would expect that as things cool off in the coming months, markets will begin to focus on the challenges facing the economy going forward. While we do not think this would precipitate a re-test of the March lows, we do believe that volatility will persist through year-end.

Oh, and don’t forget about the November election... 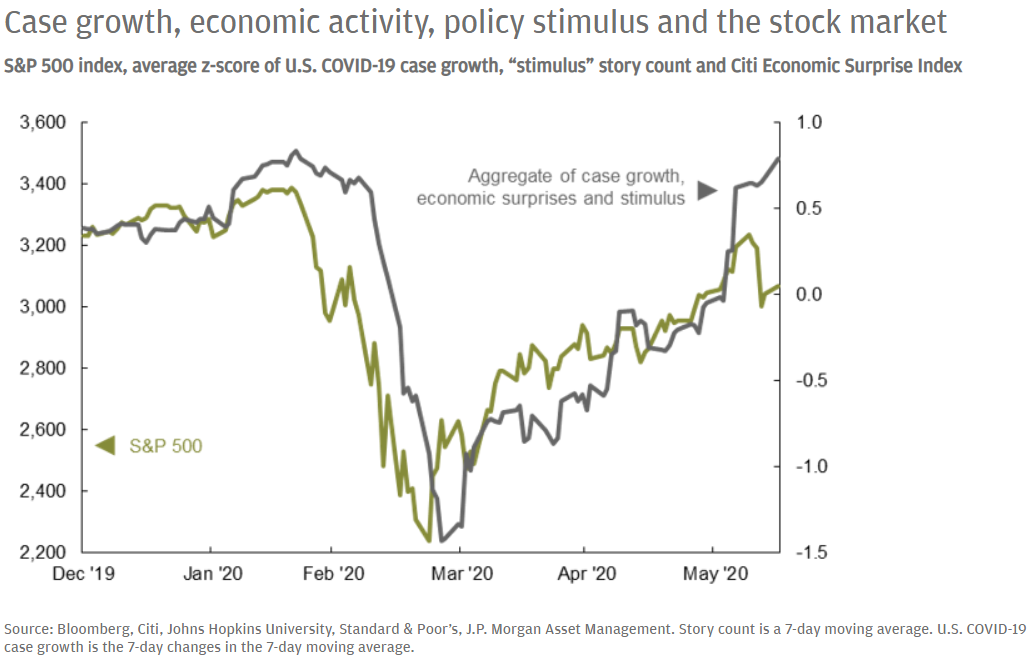 And now regarding the health of our banking system…

With the scars of the financial crisis still fresh in investors’ minds, the current recession has sparked renewed concerns around the stability of the banking system, specifically regarding bank exposure to collateralized loan obligations (CLOs) backed by risky leveraged loans. However, there are several reasons why another collapse is unlikely.

First, the underlying loan collateral of CLOs accounted for just 5.6% of 2019 GDP, while the residential mortgage market — the collateral that backed subprime collateral debt obligations (CDOs) during the last financial crisis — accounted for 73.5% of GDP in 2007.

Third, CLO ownership is largely concentrated amongst the top three U.S. banks that typically hold the most senior secured AAA tranches. Importantly, since 1994, due to credit enhancements across senior tranches, there has never been an AAA-rated CLO tranche that has defaulted.

Lastly, aggressive and swift action from the Federal Reserve has provided support to credit markets that was not present in 2008, relieving some of the burden on banks. We recognize the current recession will present some challenges as defaults move higher in the lower rated tranches. However, we do not expect a wave of defaults severe enough to cause a systemic problem to the financial system. 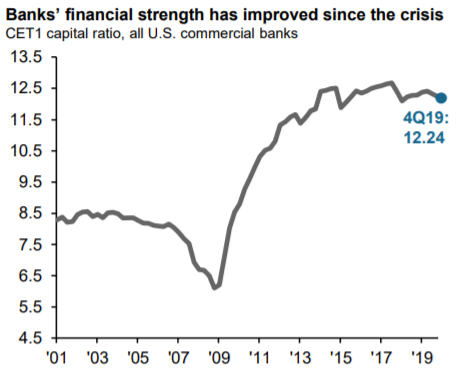